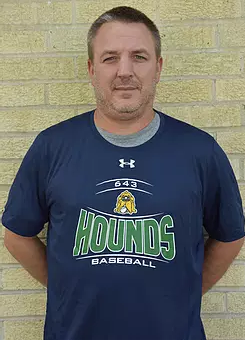 Coach Anderson played his High School Baseball at Downers Grove South High School in Downers Grove.  After completing his high school career he received an athletic scholarship to go play baseball at Parkland Jr. College in Champaign IL.  After completing his college career he was drafted by the Minnesota Twins and played 4 seasons in the Twins Minor League System (1993 – 1997). He also played 2 years of Independent Baseball for the Elmira Pioneers in New York (1997 & 1998).

Coach Anderson has coached youth baseball for 7 years and 2020 will be his 1st year with the Hounds Organization.  He has been giving pitching instructions since 1999.

Anderson is married to his wife Tina Anderson and they have 2 kids: Tylor 18, Freshman at Goshen College playing Baseball, and Alana 16, Sophomore at Joliet West with a verbal commit to Northern Illinois University for Gymnastics.  He currently resides in Joliet.

To contact Eric for lessons please email or call: